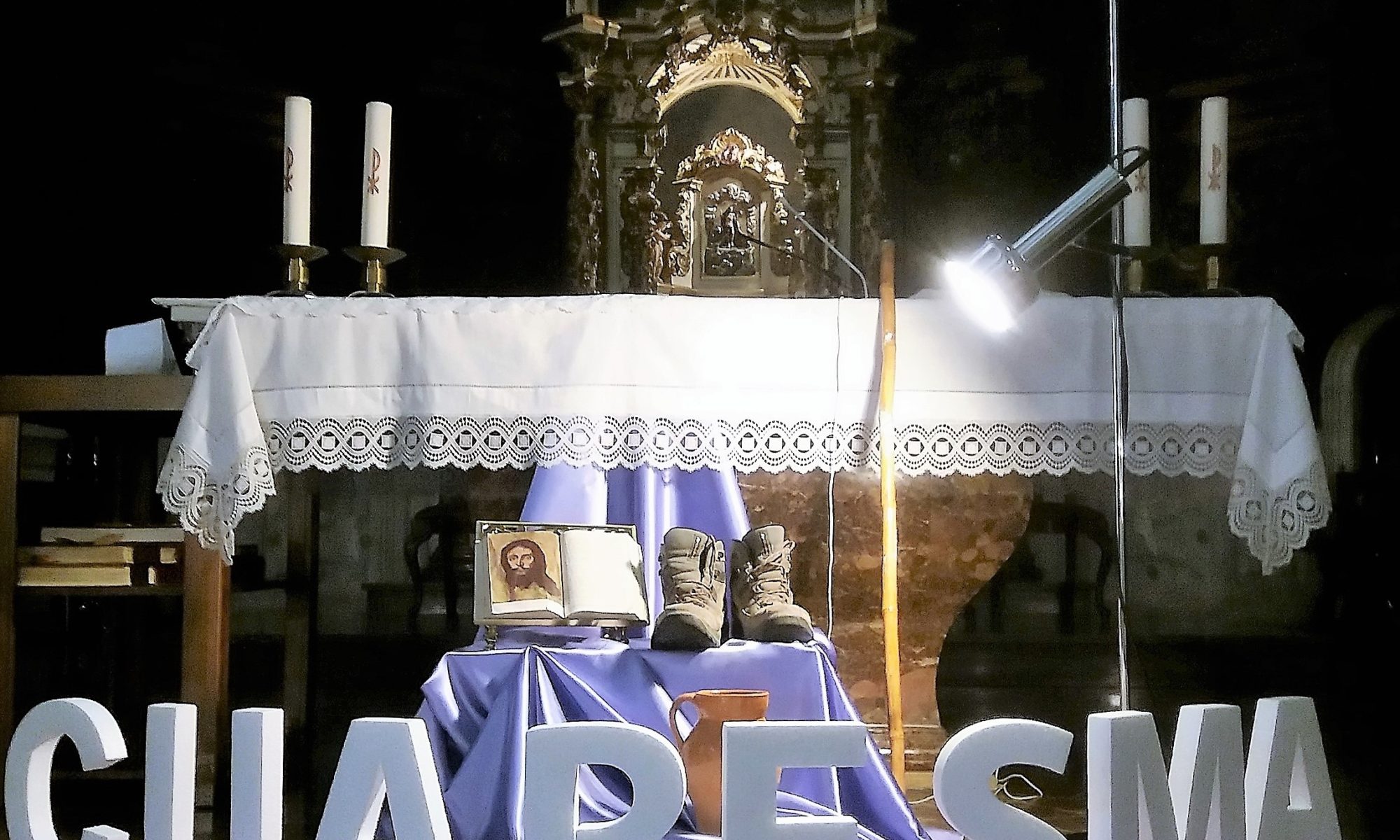 Ancient trails have been with us for centuries. A few of them also for over a millennium and a handful close to two millennia. They will still be there after Covid-19. And we will then do what pilgrims do; we will walk them. If we think of Covid-19 as another journey in our life then we know that it will lead us to a destination and, after that, we will cross that threshold and continue with our other terrestrial journeys.

For the time being, I can only reflect on journeys. Since we are in Lent, I will reflect on some biblical journeys and their relevance to our lives today. If I am not theologically correct, please bear with me. I am not a priest, pastor or preacher. I am just a pilgrim who has had to hang up his boots temporarily.

Journeys share some common factors. Among these, they all have a starting point, they imply movement from point A to point B and they all have a destination (in case of a pilgrimage: A Loco Sancto i.e. to a sacred place). These ‘commonalities’ however can be physical, emotional, psychological or spiritual; they can also be temporal or perennial. However, they are all journeys; they all share some basic similarities.

I will dwell on 4 old testament journeys for some Lenten Reflections.

The reiterating theme of all these journeys is that God does not do flood lights. The best we can hope for is that his word is, “a lamp to our feet and a light to our path.” In other words, in each of our ‘here and now’ we have to trust in his faithfulness and providence. By doing so, we accept that this ‘here and now’ makes sense as part of the bigger collage that is the journey of life. This is faith.

FAITH THAT OUTLIVES US

“Go from your country and your kindred and your father’s house to the land that I will show you. I will make of you a great nation, and I will bless you and make your name great, so that you will be a blessing…And Abram journeyed on, still going toward the Negeb.”

Abram was not young, worked in the family business (The interpretation from Judaic texts are that his father Terah owned a workshop producing Idols and all three sons worked with him) and, by definition, he was relatively well off and settled. Notwithstanding this, he gathered his family and his belongings and travelled to Canaan.

Why? God had instructed Abram to take this journey with his entire household to a land that he had chosen for him and promised to make a great nation out of his family.

The journey was not a straightforward one. When he reached Canaan the land was suffering from a major famine and so they pressed on to Egypt (Genesis 12: 12 – 20). What follows is a story of intrigue, conflict, conceit, kinship, cleansing and catharsis and above all a renewal of God’s Covenant to Abraham through descendants.

What may have seemed like outright folly from the word “go” gave the world the father (progenitor) of around 5 billion people who identify themselves as Christian, Muslims or Jews worldwide.

All God asked for in return was Abraham’s faith.

So Jacob was left alone, and a man wrestled with him till daybreak. When the man saw that he could not overpower him… the man said, “Let me go, for it is daybreak.” Jacob replied, “I will not let you go unless you bless me.”

Jacob was the son of Isaac and grandson of Abraham. He was the younger of twins. Having cunningly supplanted his father’s blessings from his elder brother, he escaped to Haran fearing for his life. Years later, married to Leah and Rachel, settled and prosperous in the land of Haran, Jacob is instructed by God to go back to Bethel (where his brother’s tribe still lived)

Why? We again have a situation – like that of his grandfather before him – of a journey in faith.

The journey from Haran to Canaan (Bethel or Luz) was not Jacob’s first journey nor would it be his last. When his son Joseph prospered in Egypt having been earlier sold into captivity by his brothers, Jacob and his families travelled to Egypt at a time when Canaan was struck by a great famine; reuniting him with his son before his passing away. Why was the journey from Haran to Bethel so important?

In Jacob’s own words, “O God of my father Abraham, God of my father Isaac..I am unworthy of all the kindness and faithfulness you have shown your servant. I had only my staff when I crossed the Jordan River (i.e. when fleeing Canaan), but now I have become two camps.” He wrestled with God at a time of great concern for him because of God’s command to return to Bethel. He knew that in so doing he would have to face the brother he has cheated. He was scared.

Don’t we all at various points of our life “wrestle with God.” It’s not a sin to wrestle with God as long as we do so in faith. God rewarded Jacob’s faith as God reiterated to him the blessing he had made to his grandfather Abraham.

All God asked for in return was Jacob’s faith.

“Judah said unto his brothers, what profit is it if we kill our … let us sell him to the Ishmealites.”

Joseph was the youngest of Jacob’s sons (although Jacob and Rachel later had Benjamin). His brothers felt that their father loved him more than he loved them and this gave rise to envy. While the initial plan was to kill him, they eventually decided to sell him into captivity and inform their father that he had died tragically.  Medianite merchants eventually sold Joseph as a slave in Egypt and – with God’s help – rose to a rank of Chief Minister in the Pharaoh’s court.  Another period of draught in Canaan brought Jacob and his family to Egypt, re-uniting them with Joseph who forgives his brothers.

Joseph had no option to undertake this journey. He was sold into captivity. However, what followed would have had to be grounded in faith. A dream in Canaan, of his father and brothers bowing to him, came to happen several years later in Egypt. In between these two events was an intense journey isolation, anguish, emotional upheaval and above all of faith.

“When Pharaoh heard of this, he tried to kill Moses, but Moses fled from Pharaoh and went to live in Midian.”

“And God said, “I will be with you. And this will be the sign to you that it is I who have sent you: When you have brought the people out of Egypt, you will worship God on this mountain.”.”

Moses escaped from Egypt for fear of being caught after having killed an Egyptian who was mistreating a fellow Israelite slave. Having married and settled in Midian, God appeared to him asking Moses to return to Egypt and lead the Israelites to the Promised Land. Incredulous as it may sound a man who was sought for murder in Egypt was instructed by God to return to Egypt and ask the Pharaoh to release all his ‘cheap labour’. Why? Because “I AM” said so!

What should have been a journey of about 40 days from Egypt to Israel took 40 years. It was a perilous journey where no one who had left from Egypt, except for Joshua (who led the battle against Jericho)  made it to the Promised Land. Even Moses himself saw it only from a distance before passing away. The Israelites endured deserts, famine, battles and God’s wrath but above all, they experienced his providence.

This was a journey of promises, faith, betrayal, re-conciliation and unconditional love. The main lesson is that God delivers on his promises.

Our faith is rewarded. When, where, how may be valid questions and generally without a ready answer in the short term.

God’s word is not a flood-light. It is a lamp to our feet and a light to our path and our faith is a lesson in living a continuous series of “here and now”.