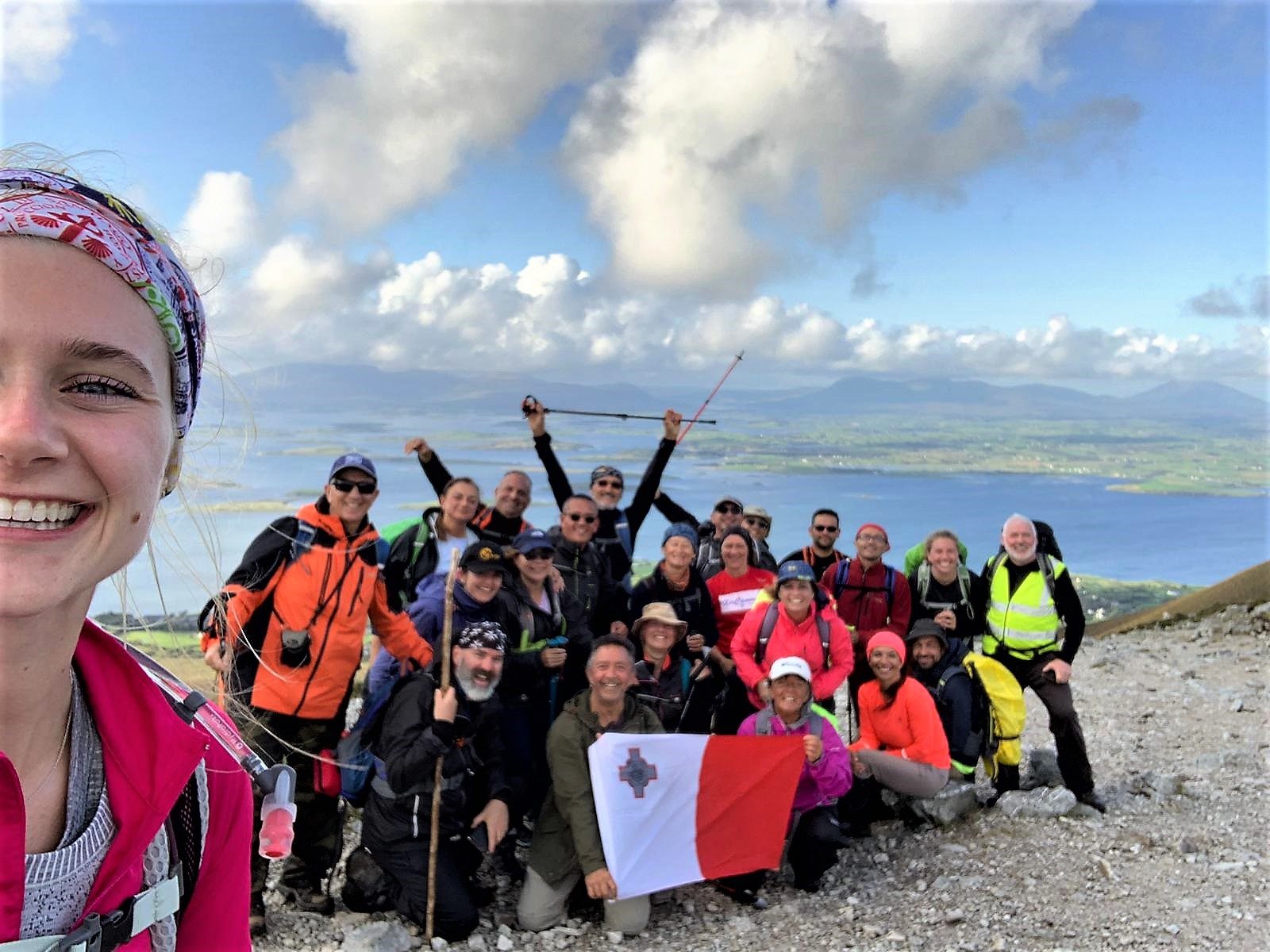 I would have loved to know Don Elias Valiña Sampedro, dubbed the ‘mad priest of O Cebreiro’ for his tireless efforts over 2 decades to re-energise the Camino de Santiago. The yellow arrow synonymous with the Camino de Santiago is largely attributable to him. He personally invested in large quantities of yellow paint and crossed Spanish countryside from the Pyrenees to Santiago de Compostela painting arrows. He did not live to witness the routes being elevated as UNESCO World Heritage significance as he died prematurely in 1989. Santiago de Compostela became a UNESCO World Heritage Site in 1985. The Camino was recognized as a European Cultural Way in 1987. But it was not before 1993 that the routes tied to the 9th century discovery of the sarcophagus of St. James, were declared of World Heritage significance by UNESCO.

I have the pleasure to know Fr. Frank Fahey, the parish priest of Ballintubber Abbey in County Mayo, Ireland, where the Tochar Phadraig commences, traversing pristine Irish pastureland along the ancient chariot road, through the ancient town of Aughagower and across Croagh Phadraig to Murrisk. His words come back to me from time to time and I smile as I hear his voice with my inward ear, “Light a candle, include strangers in your group and no complaining.” The Augustinian abbey was built in the 13th century on the site of an earlier church next to the well where St. Patrick evangelized and baptized the local Celtic tribes in the 5th century AD, some 300 years before the discovery of the tomb of St. James in Compostela, Spain. Fr. Fahey, like Fr. Elias, worked relentlessly to re-establish the Tochar Phadriag negotiating paths with local farmers and landowners. My wife and I are probably the only 2 pilgrims to have walked all five of the Celtic Caminos twice; and we did this in the space of a fortnight back-to-back in summer of 2019 leading two groups of XirCammini pilgrim hikers. It was a memorable experience for all 60 hikers; so much, so that we are planning to repeat this experience again – Covid 19 permitting – in the summer of 2020.

Photos of the Maltese pilgrim hikers receiving the teastas from Fr. Fahey: https://www.facebook.com/ballintubberabbey/photos/a.2519805538238852/2519807844905288/?type=3&eid=ARCnMsN9j7bRHOmpF-K-yP4NA2ySqKHsuwP2wLaPqYHi2pnFXQpQ3wl1KvwMJ2bexfUI1viVn7PXE5AJ&__xts__%5B0%5D=68.ARASMKW75nUVh9RByc-KrK3rf7OcL7Z7pfBn0nk69zT5uJZr_vrqrihBWlGxQkBgAJYmGoYVbjCYFa6disU2E5PIoYFYH-Zw8J7jubMWvUFUmSntG9Asok0WH2HNEaYtYJew4un5CMxRLpcw_1ypL677cmH_wedHzX8-2jHTqgo9N2A8nBe0O0MHM6ZGsKavKN74kC2JEzmsbG_rdSOeITaFbx9gXaAPFBIiVoJiIhgqm9RWnIfrqX4HtCI6rXmLHwT_JqmwzUxnQoV6NsSVIbPoo2m-JMPlwU9U21e7k2MIAVSxxUEp5VPH9hDV09YGzVCVJGs&__tn__=EHH-R

The inspiration of Fr. Elias and Fr. Fahey ‘lit a candle’ for us. They were an inspiration for XirCammini to look closer to home to revive a similar, ancient walk. Their inspiration enabled us to work with vigour on the Universal Peace Walk 1543AD®, a 16th century walk in Malta of European (i.e. old world) significance. Malta may not have the natural beauty that larger trails – such as in Spain or Ireland – offer. But what we lack in relative natural beauty we surpass in historical heritage. https://xircammini.org/route/malta-universal-peace-walk-1543ad/

Fr. Fahey’s, “light a candle, include strangers and no complaining,” are the rallying cry of this project.

We engaged with virtually all the local councils in the Majjistral and Xlokk segments through which the Universal Peace Walk would cross. All local councils supported the idea in principle. One in particular, the Zejtun local council, stepped up to the plate offering practical help, which we greatly appreciated.

The island has a number of hiking groups. We identified the most visible (including in alphabetical order: Caminiamo, Experience: Adventure & More, Leisure Ventures, Malta Photo Trekking, Trail Makers and Whereto360). Although the event has been publicly advertised and is open to everyone, we thought of reaching out to such groups inviting them to be part of this historic walk. Some ignored it, one declined and one, Whereto360, enthusiastically shared it.  For this we are grateful.

A local Re-enactment group – Compagnia San Michele – also got in touch with us to participate in the event. Needless to say, we were elated.

We engaged with local authorities and private companies seeking funding opportunities for the project. Regrettably – but thinking positively – it soon became apparent that Fr. Elias’ proverbial brush and paint would define our course as no entities seemed to share our enthusiasm for the project. The 1% inspiration had to be followed by our 99% perspiration if we were to see this project through. Of these entities perhaps the only supportive one was the Malta Tourism Authority with whom we continue to engage informally with the long term objective of ‘polishing the event’ to a tourism-quality product that would in time attract overseas hikers to it.

However, in the meantime, we operated on a shoestring budget and a small army of volunteers to procure waymarks, produce Credencials, book transport and to subsequently fix and remove temporary waymarks. We are thankful for all the support that we received so far.

When Covid 19 hit XirCammini reluctantly decided to postpone the walk. This was a difficult decision since its date ties with the anniversary of the historic event. Identifying a date later on the year that ties in with the event may be a challenge. But we were inspired by the words of a veteran Camino aficionado, “ancient pilgrimage routes have been here for centuries and will be here after Covid. The life, health and welfare of pilgrims may be more fragile.”

So we decided that we will live to walk another day. That is what pilgrims do. No complaining.

Life is a journey and so much of accomplishment depends on the outlook we have and the ardour we put into life. Perception is key and positivism lightens the yoke that each one of us carries.

So, “light a candle, include strangers and no complaining” should define every other journey we have.

Above all, while on your journey be kind to other pilgrims on their respective journey of life. It is generally the aspects of life with no or little cost that have the highest value.