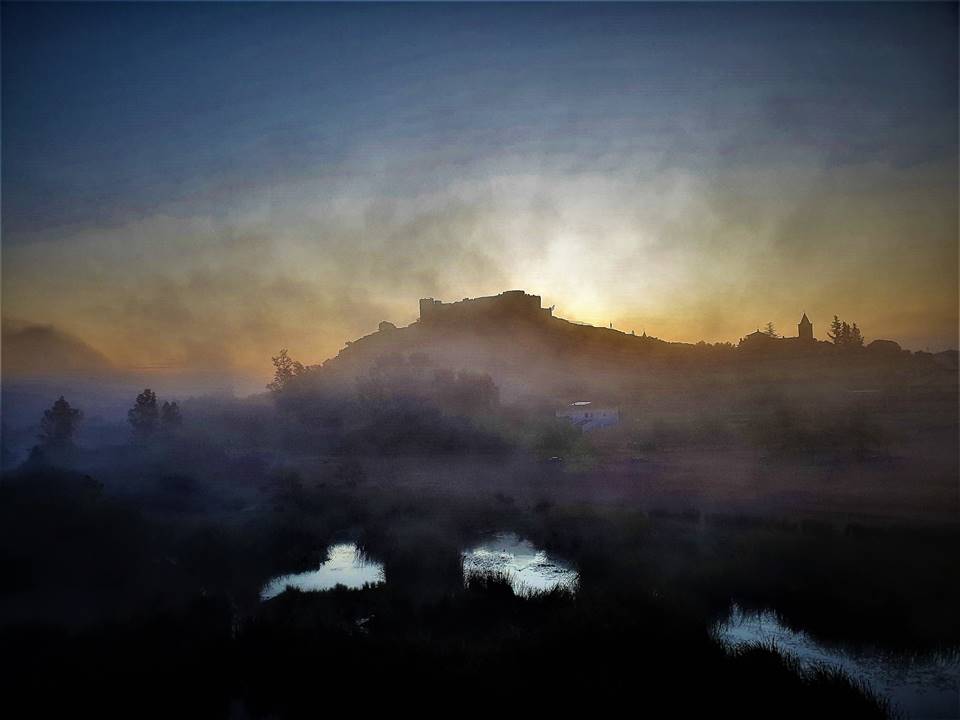 There are catalysts, ebbs and flows to ancient pilgrimage practice. For Santiago 2 of the earliest dynamos generating momentum for the pilgrimage to Santiago de Compostela were the

Between the middle and the end of the 1st Millennium, i.e. from the collapse of the Roman Empire and to the establishment of the Holy Roman Empire, Europe plummeted into the period known as the dark ages. In the midst of this the Umayyad campaign spread through Visigoth and other fragmented kingdoms on the Iberian Peninsula (Hispania or Andalusia) even reaching the Rhone Valley in France by 725 AD.

This coincided with the Golden Age of science, architecture and literature for Arabs and their legacy remains until today particularly in southern, eastern and central Spain. Succeeding Spanish kings not only sought to preserve the Arab legacy but also, for example in architecture, they merged it with their own. This is manifested in both larger edifices such as in Toledo as well as in smaller motifs such as some of the décor elements in the Las Huelgas monastery in Burgos.

The Camino Mozarabe is a Camino that walks through land occupied by the Arabs in the Middle Ages in central Spain. Raymond Aquilina, a veteran Camino aficionado recently walked the Camino Mozarabe. XirCammini interviewed him.

Raymond, recently retired, has walked a number of Caminos including the Camino Francés, Camino del Norte,  Via De La Plata and the Camino Primitivo.

His latest Camino was from the Camino Mazarabe.

1. What motivate you to go on this particular Camino?

I wanted to try a Camino that is not commonly walked by other pilgrims. The Mosarabic Camino (or Camino Mozarabe), as the name indicates, follows a trail with a Moorish and Arabic influence coming from the times of Arabic occupation of Spain. The Islamic historical and cultural contrast provides a fascinating backdrop to this intrinsically Christian trail.

2. What time did you start walking in the morning? What was (from where to where) was your longest walk? Which was your shortest? What was the average you covered per day?

I normally started at 7:30 a.m. In Autumn this is just before sunrise. There were only a couple of times that I started earlier, i.e. at 6:30 a.m. But I soon stopped this practice for fear of getting lost on account of the inconsistent signage (arrows).

3. How important was it to ‘share your experience with others as you walked’? Did you look forward to meeting others on the Camino; sharing your experience and hearing their story?

For me it is of utmost importance that I share this experience with others. I consider this an integral part of the Camino experience. I always look forward to meet other fellow pilgrims on the Camino. Every pilgrim has his own special experiences and I show great interest. This being said, on the earlier part of this Camino one encounters less pilgrims.

4. What do you think makes this Camino different from other Caminos in Spain from your perspective?

The ‘Mozarabic’ touch to the Camino makes it unique. Cities worth mentioning along the route include Almeria, Granada and Cordoba. One also mustn’t forget the many other small towns with innumerable castles or fortifications enroute.

5. Is there any accommodation  that stand out in terms of service? Are there others that you would not recommend?

Since it is one of the lesser walks Camino routes, one of the main drawbacks is that there are relatively less albergues along the way. In some towns or villages accommodation is limited to a municipal albergue if at all. For example, once I tried in vain to reach an albergue by phone and ended up walking an additional 2km on the motorway at the end of a day’s route in order to make it to a little hotel in a patrol station. Quite often I used hostals. I wish to single out for praise one lovely private albergue, Fandalucia, entirely dedicated for pilgrims, at Quentar before reaching Granada.

6. Along the route which were the towns / villages worth spending some extra time in and why?

Almeria (Alcahaba), Granada (The Alhambra) and Cordoba (Mesquita) are a must. However there were towns such as Guadix, Quentar, Medellin that also stand out among many other lovely towns and villages.

7. If you had to sum up the Camino in a few words who would you explain it / sell it others?

I would tell anyone who plans to walk this Camino that it is a wonderful route which gives one significant fulfilment both from a solitary, spiritual or reflective perspective as well as from a historic and cultural perspective. However one has to be prepared to walk relatively long distances at times and be prepared for hot weather especially between Almeria and Cordoba. Hours of solitary walking are to be expected due to lower number of pilgrims on this Camino. There were times when I was the only perregrino in the albergue!

But, within this ambit and caveats, I would certainly strongly recommend walking the Camino Mozarabe.